A life on death row is unimaginable for most people—but for almost 3,000 prisoners in the United States, it is stark reality.

Gary Tyler used to be one such prisoner, unjustly convicted and sentenced to death at age 16 for a crime he did not commit. After spending 41 years of his life at the Louisiana State Penitentiary in Angola, America’s largest maximum-security prison, Tyler was released in April.

Tyler sat down with the Truthdig team on Thursday for a live discussion on the U.S. prison system, streamed directly to our Facebook page. 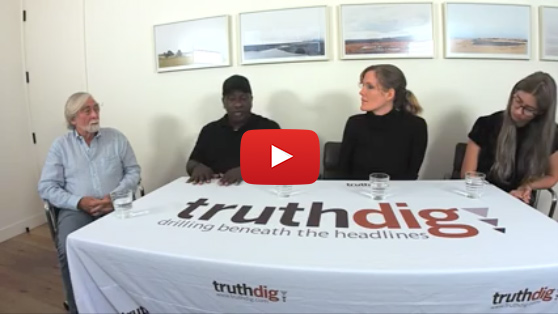 Tyler recently sat for an interview with Truthdig Editor in Chief Robert Scheer for KCRW’s “Scheer Intelligence” podcast. They discussed how Tyler was able to hold on to hope during those dark decades—for himself and for the prison system itself.

“When I was in prison, I was introduced to a culture that I never thought existed,” Tyler told Scheer. “I’ll never forget that when I went to death row, they had these doors that were slamming and prisoners shouting and hollering. It was like being introduced to an insane asylum, I guess.”

During his time in prison, Tyler directed a passion play featuring other inmates as cast members. This project became the basis of the documentary “Cast the First Stone.” Tyler explains:

Of course, I was able to recruit people from all walks of life in the prison. Also, that we’re talking about some people that had disciplinary problems and I knew these guys. I knew that giving them a chance, an opportunity, I could help transform them. I like that I had opportunity to interview and audition, you understand, these guys, because I opened it up to the prison population and I was getting, if you consider the worst of the worst, and to hear these guys say, “Give me chance. Let me prove myself.” It’s like people asking society, “Give me a second chance.” So, I heard their cries and I gave them that chance. I found them to be the most committed and dedicated actors that I had in the production.