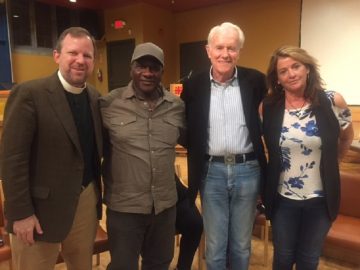 Justice takes many faces and many forms. For some the answer to the death penalty question is swift and sure; for others, the lines are blurred between a respect for life and a respect for the victims.

For actor Mike Farrell, self-described “social justice advocate,” it has been a decades-long battle, as an opponent of the death penalty, and an advocate for prison reform. Known mostly for his role as for his role as “BJ Hunnicutt” in “M.A.S.H.” and from NBC-TV’s “Providence,” he is the current President of the Board of Directors of Death Penalty Focus, a spokesperson for Concern America, an international refugee aid and development organization, among other organizations.

On Tuesday evening, he gathered with fellow opponents of the death penalty, along with those who have have been personally affected, for a “World Day Against The Death Penalty with Mike Farrell and Friends,” at All Saints Church, for a panel discussion about what the Church called “the harms that the death penalty inflicts on exonerees, victims families, and our society at large.”

The discussion also marked the 15th Annual “World Day Against the Death Penalty.” With the passage of Prop 66 last November, California is inching closer to the resumption of executions.

“We have determined that some human beings are not human, are not worthwhile or capable, and that we can just do away with them,” Farrell told The LA Times last year, adding, “If you set up that belief system in a society, you can justify torture, assassinations by drone, just about anything.”

The death penalty has been in place continuously in California for almost 40 years, though executions were suspended in 2006 after the current method for lethal injection was challenged in court. Following 40 years of a legal death penalty in California, executions were halted in 2006, when the lethal injection method of execution was challenged. In 2014, a federal judge ruled the system unconstitutional, but the US 9th Circuit Court of Appeals overturned the decision in 2016, bringing California closer to performing executions again.

Also participating in the panel was Gary Webb, who, in 1975, was sentenced to death as a youth in Louisiana for a crime he didn’t commit, making him the youngest man on death row.

In 2012, the U.S. Supreme Court ruled that it was unconstitutional to sentence minors to life without parole and applied its decision retroactively. Offered a plea bargain by prosecutors in order to avoid another trial, Gary agreed to plead “guilty” to manslaughter in exchange for his freedom. Having served 41 years in prison, Gary was released from prison in April 2016. He now lives in California and works on advocating against the death penalty and policies that support mass incarceration.

When it came time to sentence her sister’s killer, Bethany told prosecutors at a sentencing hearing, she didn’t want the death penalty, saying, “There is no justice. Murdering someone else in my sister’s name would be defiling everything she was.” Says Webb, that although there is no doubt about the perpetrator in her sister’s case, she knows the death penalty leaves open the possibility of executing innocent people.