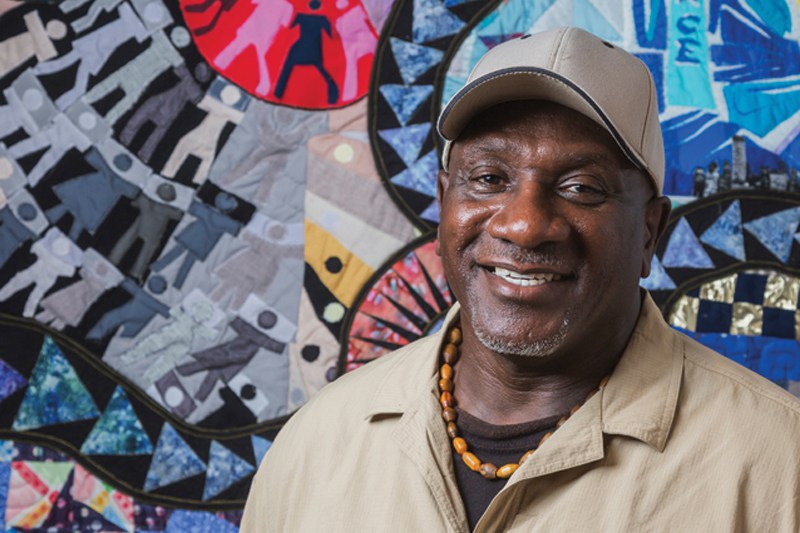 Soft-spoken 58-year-old ex-prisoner Gary Tyler is finally at peace. The social activist has adopted the pastoral city of Pasadena as his home — a far cry from the grim, gray walls of the Louisiana State Penitentiary, infamously known as Angola, the worst and bloodiest prison in the nation. When Tyler was first incarcerated there 41-and-a-half years ago for a crime that he maintains he did not commit, he was the youngest person on death row.

“I feel free here,” declares Tyler, who resides in a small, picturesque guesthouse where he frequently invites local doctors, lawyers and other activists — several of his longtime supporters.

“I can wake up in the morning and hear the birds chirping, smell the fresh air and feel the fresh breeze,” Tyler says. “People here in Pasadena are really social and friendly. Everyone I encounter is very nice.” 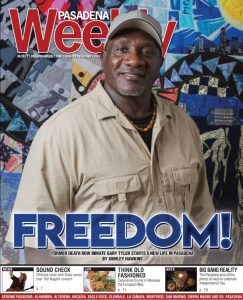 Tyler’s legal nightmare began at the age of 16, when he was charged with a murder and sentenced to the notorious Angola maximum-security prison in Louisiana, at 17 the youngest inmate to be incarcerated on death row.

It was 1974, when public schools across America were undergoing integration. Racial tensions flared at Destrehan High School in St. Charles Parish, Louisiana — even though the Brown v. Board of Education case desegregating public schools had been decided by the US Supreme Court 20 years earlier.

Tyler was sitting on a bus filled with African-American students when a crowd of approximately 200 white students began yelling racial slurs and throwing rocks and bottles. A shot rang out that wounded 13-year-old white classmate Timothy Weber, who later died at the local hospital.

“I was known for being outspoken,” Tyler recalls. During the turmoil, Tyler witnessed his cousin being harassed by sheriff’s deputies and spoke up in his defense. Tyler was subsequently arrested for allegedly disturbing the peace and interfering with a police officer’s duties.

The bus was searched for several hours, but no weapon was found. Sheriff’s investigators transported the students to the substation where they once again searched the bus. This time, they allegedly found the gun — a government-issue 45-caliber Colt automatic.

Police produced the gun as evidence at Tyler’s trial. Later, it was discovered that the weapon was identified as having been stolen from the sheriff’s firing range in Jefferson Parish 10 miles away. The gun later disappeared from the evidence room.

At the sheriff’s substation, Tyler was cursed at and threatened by police. “They kept asking me questions about what happened on the bus,” Tyler recalls. “When I said I didn’t know anything, six or seven police officers brutally beat me for two to three hours in the booking room at the substation.” Tyler’s mother, Juanita, arrived hoping to take her son home, but was horrified when she heard his muffled screams.

Tyler was subsequently tried by an all-white jury. He was sentenced to death by electric chair.

“When they accused me of murder, I told them that I was innocent, but no one listened,” Tyler sadly recalls. He was shipped to Angola, the largest maximum security prison in the country.

Tyler still remembers the sense of fear he felt as the steel gate on his prison cell clanged shut. “When the prison gates shut behind me, I felt as if I was shut off from the rest of the world,” he remembers. “You knew you would not exit those gates once they were closed.”

Tyler languished on death row for nearly two years. While there, he constantly wrote letters pleading for help and support. “I sent letters to every news and media outlet I could think of,” he recalls. “Eventually my case made its way to the local and international news.”

In the case Roberts v. Louisiana, the US Supreme Court in 1976 ruled that the state’s death penalty was unconstitutional. Tyler’s sentence was commuted to life in prison without parole until after 20 years.

Tyler says that day-to-day life in Angola prison was a test of sheer survival. “Angola was the bloodiest, most infamous prison in the nation,” he recalls. “It was a place of turmoil where prisoners were killing each other and committing suicide.

“I saw horrible things in Angola — inmates being set on fire or stabbed with homemade spears. I saw inmates who were doused with acid by other inmates. Some prisoners even got beaten to death by guards,” he remembers.

Fortunately, a group of inmates formed a bond to protect the vulnerable, frightened teen. “They saw a little kid who was all alone,” Tyler recalls. “Many of them were uncles and fathers — and they stepped up as responsible men to make sure that nothing happened to me.”

Despite his dire predicament, Tyler became a model prisoner.

“I got my GED, studied graphic arts and printing, and attended paralegal school,” he proudly recalls. He also mentored other inmates and spent 17 years as a volunteer in the prison’s hospice care facility.

But it was an invitation to join Angola prison’s drama club that radically changed his life. For the next 20 years, Tyler headed the club, which led to him directing the Passion play “The Life of Jesus Christ.” Impressed with the production, directors Jonathan Stack and Nicholas Cuellar filmed a documentary about the project titled “Cast the First Stone.”

TROUBLING FROM THE BEGINNING

Tyler’s case, which was widely publicized off and on for four decades, continued to gather a groundswell of support from athletes, left-wing activists and celebrities of the times, such as the British reggae band UB40 and the Neville Brothers. Rallies eventually sprung up across the country and abroad to protest Tyler’s wrongful incarceration.

“I received cards and letters on a daily basis from people from all over the world,” recalls Tyler. “They told me to keep holding on and to continue to be strong.”

On the first appeal of Tyler’s conviction in 1981, a federal appeals court admitted that Tyler was “denied a fundamentally fair trial,” but refused to order a new one for him.

And despite the Louisiana Board of Pardons recommending that Tyler be released three times based on his positive work in prison, several Louisiana governors refused to act on his case.

When the board recommended a pardon for Tyler in 1989, Republican Gov. Charles “Buddy” Roemer denied Tyler a pardon not once, but twice. Roemer was running against Ku Klux Klansman David Duke for re-election and refused to consider Tyler’s case in a racially charged election, feeling that a decision to release Tyler would not be favored by voters.

“In a news release, Roemer said that since I didn’t have my GED yet, I wouldn’t be able to make it in society,” Tyler recalls. “After I obtained my GED, Roemer still denied me a pardon.”

“They would not let Gary out,” says longtime Los Angeles peace activist Bob Zaugh, a supporter of Tyler for 28 years. “When Gov. Kathleen Blanco was leaving office, we appealed to her, but she ultimately ignored his case.”

“I worked on Gary’s case for 39 years, starting in 1977 up until his release in 2016,” Howell reflected. “The case itself was a clear miscarriage of justice. The 5th Circuit US Court of Appeals ruled that Gary was denied the presumption of innocence and had a fundamentally unfair trial, yet refused to give him a new trial. The case was permeated with racial issues and was deeply troubling from the beginning.”

After enduring over four decades of incarceration, the St. Charles Parish District Attorney’s Office in Louisiana finally agreed to overturn Tyler’s conviction in 2016.

Tyler agreed to enter a guilty plea for manslaughter and received the maximum sentence of 21 years. Since he had already served more than twice that time, his sentence was overturned. Tyler was quietly released from Angola penitentiary on April 29, 2016.

It is reported that Angola Prison Warden Darrell Vannoy wept as he escorted Tyler to the prison gates, saddened to see a man released who had helped to transform the prison and many of its inmates.

Zaugh said he was ecstatic after hearing of Tyler’s release. He brought Tyler to California to start a new life.

“I have no doubt that Gary will be a positive force and resource in the Pasadena community,” says Zaugh. “He is one of the kindest, most polite, most engaging persons I’ve ever met.”

Due to the plea bargain, Tyler received no monetary compensation after spending four-decades behind bars. He does not qualify for Social Security since he has never been active in the work force.

Fortunately, Tyler now works as an outreach and engagement support worker at Safe Place for Youth in Venice, where three days a week he helps homeless youth get off the streets.

Tyler’s supporters have set up a re-entry fund to help Tyler adjust to life after prison. Zaugh arranges speaking engagements for Tyler, who talks to various organizations about his remarkable journey.

“I left prison rich in spirit and eager to embrace life,” Tyler declares, adding that despite his four-decade ordeal he remains unbroken. Remarkably, he harbors no trace of bitterness.

“I am happy to have an opportunity to live a life that had been denied me for four decades,” he reflected. “I’m taking life day by day. I want to write a book, travel and meet the people all over the world who have supported me for over 41 years.”

Contributions for the Gary Tyler fund can be sent to https://www.libertyhill.org/form/back-to-life-re-entry-fund