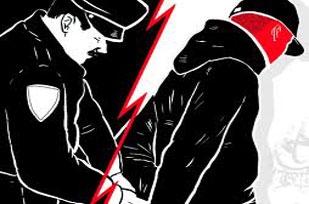 Today, across the nation, we witness homicidal violence delivered against unarmed people by law enforcement officers. These beatings and killings are carried out with something close to impunity. The cops almost always get away with murder. Moreover, these crimes are nothing new; they are longstanding in practice.

A study of police brutality in three major cities—conducted just about half a century ago in 1967—found that all the victims had one thing in common: they were from low-income groups. Other studies however showed that it often was enough just to be Black, even if middle class.

Take the case of Carl Newland, an African-American, 48-year-old accountant who happened to be walking by a newsstand that had just been robbed one evening in 1975. He was roughed up by the police, then brought before the newsstand clerk, who emphatically denied that Newland was the stickup man. Nevertheless, because of his “belligerent attitude” he was taken to jail and severely beaten by the police, according to statements by several prisoners. He died in his cell that same night. Consider some other cases.

About a half century ago, a Black man was forced to lie face down in a Detroit motel and a policeman cold-bloodedly pumped a bullet into his head.

–At about that same time, a 10-year-old Black boy walking with his foster father in Queens, New York, was killed by a plainclothes policeman who leaped from his unmarked car, firing away without identifying himself, shouting “Hey niggers!”

–A White “hippie” (as counterculture people were called in the late 1960s and 1970s ), finding his home suddenly surrounded by unidentified, armed men in Humboldt County, California, fled in terror out the back door only to be shot dead by county police and narcotic agents surrounding his house, the wrong house. Raiding the wrong house and shooting its frightened inhabitants became a regular pastime decades ago. “Fighting crime” and “fighting the drug war” were the call of the day.

–A 12-year-old Chicano boy in Dallas, arrested as a burglary suspect, was shot through his head by a cop.

–A Black shell-shocked Vietnam veteran was killed by two police on a Houston street as he reached into his pocket to take out a Bible.

–In Champaign, Illinois, in 1970, a frightened African American bookstore employee attempted flight when police menacingly approached his car. He was shot in the back. The culpable officer was indicted for voluntary manslaughter, released on a $5,000 bond and soon found “not guilty” by an all-White, middle-American jury.

–In Cambridge, Massachusetts, an Italian-American, working-class youth was beaten to death by cops in a police van.

–A New York policeman shot a 22-year-old Black college student who was standing with his hands in the air. Then the cop planted a toy pistol next to the victim’s body.

–A Chicano youth in Houston was taken to a secluded spot by cops, beaten until unconscious, then thrown into a bayou to drown.

–A Black youth, who was attempting to retrieve a basketball in a schoolyard, was shot through the head by Chicago police. One could go on and on with stories from years past about how the courageous Thin Blue Line repeatedly saved us with their endless killings.

Today, sparked by body-cam videos and social media, people are giving more attention to eye-witness accounts of such frightful events. Our Boys in Blue are being challenged by groups such as Black Lives Matter. But let us not overlook the many who were victimized by police during the late 1960s and 1970s and who are still with us, not merely in memory but in actuality. That is to say, a substantial number of those unjustly convicted long-ago are still in prison today. We all can name some of them: Mumia Abu-Jamal, Leonard Peltier, Herman Bell, Janine Africa, Hugo Pinell, and others. Consider also the lesser known cases. One that I have in mind is Gary Tyler.

In 1974 in Louisiana, a bus carrying Black children was attacked by a mob of Whites, some of whom were armed. According to the bus driver, a gun was fired from the attacking crowd. The shot missed the bus but killed a White youth in the surrounding crowd. The police arrived and forced the Black students out of the bus and to their knees. One of them, Gary Tyler (16-years-old at the time) was arrested for “interfering with an officer.” What he actually did was voice his objection to the deputy sheriff’s putting a gun to the heads of kneeling Black students.

The police claimed they found a gun on the bus but it curiously turned out to be a police revolver with no fingerprints. Nevertheless Gary was charged with being the possessor of the gun and murderer of the White youth. He was convicted by an all-White jury and sentenced to die in the electric chair.

This 16-year old student, Gary Tyler, had attempted to calm a snarling officer who was uttering threats while pointing his loaded weapon at the heads of Black school children. Gary could sense the rage emitting from the trigger-happy cops. Over the years many of us have confronted police in one or another such situation. Nowadays we get numerous same-day recordings of “cops gone wild” with pile-on beatings and shootings of unarmed civilians. On each occasion the local police department announces, “The incident is under investigation.” The killer cop usually is given “administrative leave with pay,” or what some of us would call “paid vacation.”

The police tell us that the victim was reaching for his waist ban or was holding a cellphone in his hand that looked like a gun—certainly enough like a gun to perforate him with a deluge of bullets. The public hears the cop’s familiar story. When attorneys and media ask for more information, what we get is what the police department decides they want us to see. Before too long, the accused cop is kindly stroked by a White, suburban Grand Jury and an obligingly soft-handed prosecutor who has his own eye on a more elevated juridical or political office, and who therefore does not want to offend his war-against-crime White constituency.

Gary Tyler is now 57 years old. He has been in prison since he was 16. He will likely remain incarcerated for the rest of his life unless the numerous pleas from around the country and from countries around the world should start having some impact.

There are scores of prisoners of political note, and hundreds of others like Gary who were just in the wrong place or just speaking up against the potentially lethal behavior of police. They continue to be victimized by a law enforcement system capable of the most venal acts both within the community and in the courtroom, taking away whole lifetimes of innocent people by use of street executions or judicial killings or perpetual incarcerations—an abuse of justice that is beyond measure.

Michael Parenti’s most recent books are Waiting for Yesterday: Pages from a Street Kid’s Life (an ethnic memoir); and Profit Pathology and Other Indecencies.